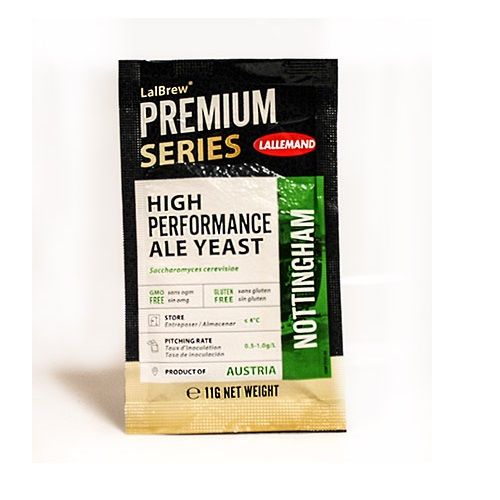 Be the first to review this product
$5.99
Availability: In stock
SKU
2325
Add to Wish List Add to Compare
Details
Nottingham Beer Yeast is an English style ale yeast selected for its high performance ability and versatility. Traditional styles brewed with this yeast include but are not limited to Pale Ales, Ambers, Porters, Stouts and Barleywines. Furthermore, this highly versatile yeast strain allows for tremendous creativity when brewing beers out of the regular spectrum: in addition to these traditional styles, Nottingham gives the possibility of creating styles such as Golden Ale, Kölsch, Lager-style beers, IPA, and Imperial Stout, among many others. The Nottingham strain was selected for its highly flocculant & relatively full attenuation properties. It produces low concentrations of fruity and estery aromas and has been described as neutral for ale yeast, allowing the full natural flavor of malt & hops to develop. The recommended fermentation temperature range of this strain is 57° to 70°F (14° to 21°C) with good tolerance to low fermentation temperatures (12°C/54°F) that allow this strain to be used in lager-style beer. With a relatively high alcohol tolerance, Nottingham is a great choice for creation of higher-alcohol specialty beers! 11 gram vacuum-sealed sachet.
Reviews
Write Your Own Review
Related Posts